The showerhead might be where water rains down on you from, but without a shower valve in cahoots, a whole matter of things could go wrong.

For instance, the shower valve is tasked with the rather important job of maintaining adequate water pressure and the right temperature.

Learning about the various types of shower valves is important.

Why? Because you want to make sure that you pick up the correct valve that’s going to give you a shower to remember, not dread.

That’s right, an incorrect selection of shower valves could spell the end of your dreamy and steamy hot showers.

So, without further ado, let’s learn a thing or two.

What Is A Shower Valve?

Shower valves may not play the leading role in a shower, but their importance knows no bounds.

If you have a modern shower with advanced shower accessories and features, you can thank your shower valve for such luxuries as well (You might want to Pick The Right Curtain For Your Shower).

The shower valve of your shower is connected to the external trim handles that you use every time you take a shower.

They connect via an internal cartridge that you may not be able to see, but now you know will be there, doing its thing.

How Do You Identify A Shower Valve?

Learning how to identify a shower valve is super important to ensure you get the right one for your shower.

There are a number of ways that homeowners can tell shower valves apart without the need to call a plumber.

Let’s find them out now and save you money in the process.

One easy way to tell shower valves apart is via the manufacturer’s symbol.

Located on the trim plate just behind the shower handle, the manufacturer’s brand name or logo can be easily found.

Knowing which company manufactured your shower valve will help you to narrow down the field as to which shower valve you might have.

If your shower’s trim plate has a capital K imprinted on it, this is an indication that it has been manufactured by Kohler.

The letter M is representative of a Moen shower. Brands like Delta, American Standard, and Price Pfister prefer to list their entire brand name on the trim plate.

They do this so that nobody can mistake one of their showers for the next.

Manufacturer-specific information is a great place to start when you want to figure out the type of shower that you have.

Whether you need to replace or repair your shower valve, many brands have nuanced fittings and measurements that relate solely to their products. This is why the brand name is such a good place to start.

Though they are two separate shower parts that are sold separately, the shower valve and faucet are inextricably linked.

Counting the number of handles that your faucet has will help you to identify the valve that you require.

If your faucet is handleless, it is known as a panel shower faucet. Panels are a modern style of faucet that features a set of control buttons.

Single handle faucets are the most common type of faucets. Both the hot and cold water can be controlled via one handle for ease of use.

One cool thing about single-handle faucets is that they have fewer moveable parts, giving them less chance of breaking.

Double-handle faucets allow you to control the hot and cold water separately from each other.

Triple-handle faucets function the same as the double-handle kind, except for a diverter between the bath and shower heads.

Learning the number of handles that your shower faucet has is another good way to figure out which type of shower valve you need.

What Are The Different Types Of Shower Valves?

Now that you know how shower valves tend to differ from each other, it is time to discover the various types of popular shower valves.

Pressure balancing valves are one of the most popular types of shower valves.

They are able to automatically control a shower’s water pressure.

There is a fine balance between hot and cold water that a pressure balancing valve does without worry.

They do this by passing water through specially designed pistons.

Pressure balancing valves have the ability to distinguish a change in water pressure between a shower’s hot and cold water lines.

Once this change has been detected, it will cut off one side at just the right time to allow a smooth change in water temperature.

The reason why pressure balancing valves are so popular is that they are the most affordable type of shower valve.

They are also the valve that is typically featured alongside a single-handle shower faucet.

The one major downside to a standard pressure balancing valve is that it isn’t able to control water volume.

Thermostatic valves are the valve type that is most associated with two-handle faucets.

They are fitted with two valves which offer the ability to control water temperature separately from pressure.

This means your water volume and temperature won’t be influenced by one another, and you will always have a powerful shower.

Another feature that sets thermostatic valves apart from pressure balancing valves is their capacity to sense and control water temperature via a thermosensitive element.

This thermosensitive element will expand and contract to restrict water flow once your preferred heat has been met.

They do this via a built-in temperature control that has been fitted directly onto the valve.

What this temperature control also does is provide you and your family with scalding protection.

Once you have found your shower’s temperature sweet spot, you can set the control so that you have the exact same temperature every time you take a shower.

For this reason, thermostatic valves are considered a premium choice of valve, which their higher price reflects.

If your shower has a preexisting shower mixing valve fitted, it is time to get a new style of valve.

Prone to scalding, shower mixing valves are not permitted in new builds of any kind for safety reasons.

If you’ve never heard the name “shower mixing valve” before but you are pretty sure your shower features one, it is time to savvy up and ship the valve out.

They fall short because they try and mix cold and hot water from the tap before it gets sent to the showerhead.

This sounds like a reasonable enough idea at first. However, if the cold water pressure ever drops out suddenly, you will really know about it.

It is suggested that if your shower has a shower mixing valve fitted, replace it with a pressure balancing valve or potentially a thermostatic valve if you can afford it.

The one thing to consider if you desire to change valve type is to ensure your home’s plumbing system is capable of such a shower valve.

This is the case because these new shower valves will require more water pressure to function properly when compared to a shower mixing valve.

They can also divert water from a fixed showerhead to a different type of body spray showerhead.

They are not in the equation for anyone with a single showerhead shower, only people with dual systems.

Usually, it is a bathtub and shower combination, but this isn’t always the case.

There are three main types of shower diverter valves that each have a different way of diverting water.

The tee diverter is the most popular type. It features a pull arm that diverts the water from your showerhead to the bathtub faucet and vice versa.

It does this by shutting off the water flow of each pipe once a preordained temperature is met.

The 2-valve diverter features a handle that rotates. This rotating handle controls the cold and hot water.

There is also a separate knob at play on a 2-valve diverter which channels water from the bathtub faucet to the showerhead and any other additional sprays.

With three separate controls at play, the 3-valve diverter is even more involved.

The three controls include two individual knobs which control the hot and cold water, while the third is the diverter of the trio.

Each style of shower diverter valve has its plus points, but the tee diverter is the most popular because it is the most simple. Which also makes it the cheapest.

Is Your Shower Valve Concealed Or Exposed?

Like we said before, most shower valves are not on show front and center, they are hidden.

Tucked behind the shower faucet, shower valves do all important work from a behind-the-scenes post.

However, exposed shower valves are gaining traction in modern homes for one rather large reason.

Unlike hidden shower valves that need to be installed behind your bathroom wall, exposed shower valves are mounted straight onto the wall.

This means they can be easily installed by home DIYers with some know-how and confidence.

If you are able to install your bathroom’s shower valve, you will save yourself a lot of money by getting a professional plumber to do it.

What’s more, without the need to open up the wall, an exposed shower valve will be a whole lot easier to repair and replace.

Of course, if you are working with a tight space to create your new bathroom, an exposed shower valve will only take up more of it. But, if you can factor it in, they certainly have their benefits.

So there you have it. You are now all the wiser on the different types of shower valves and how to identify them.

We hope this article has given you the inspiration to put your DIY hat on and start identifying your shower valve today, hoping to save you money in the process. 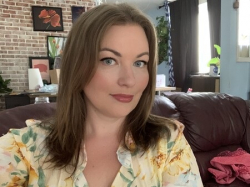 I enjoy looking for tips on how to clean the overall home, with a special interest in the bathroom. It’s the most difficult room to clean, after all! Yet the most important.